Ukraine is suffering from a severe food and medicine shortages due to geopolitical issues. In order to help the crisis, countries have sent aid in an effort which has activated global relief efforts. This article discusses the specifics of this event and offers some examples of companies that are involved. 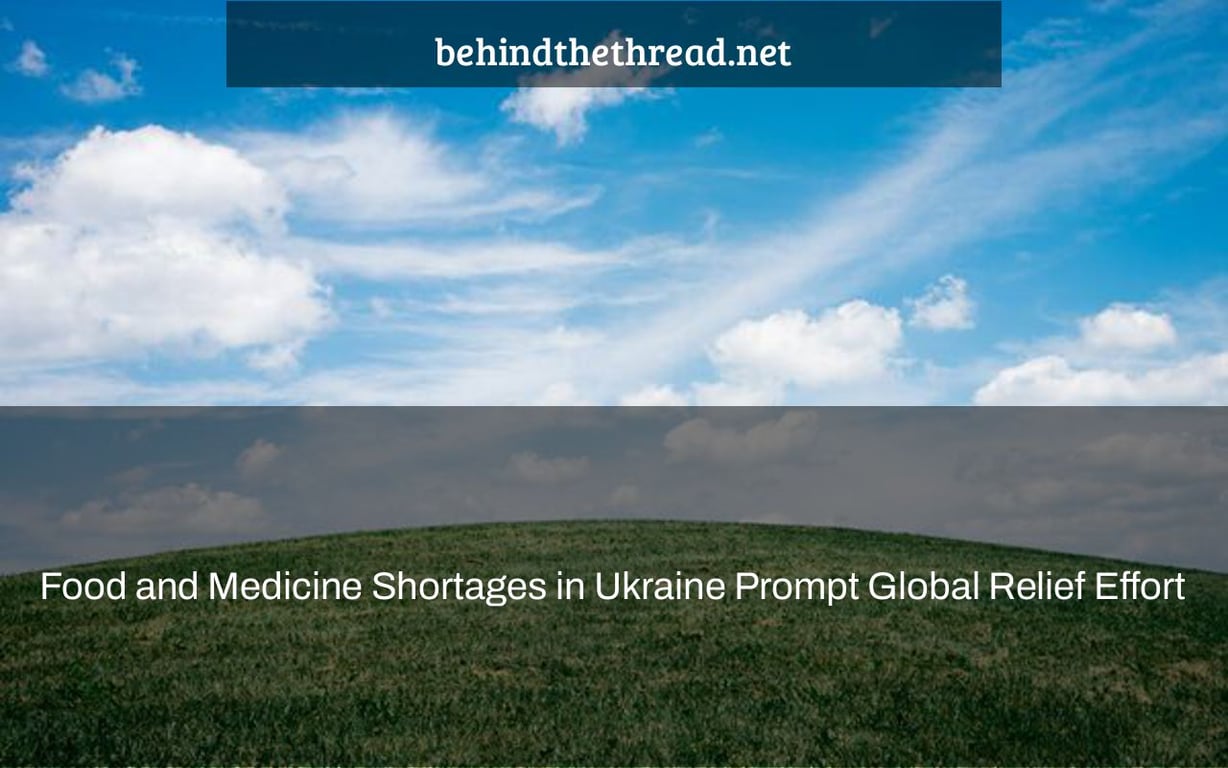 Domestic and foreign food makers, distributors, and relief workers are scrambling to keep grocery shops and pharmacies open and shelves filled as food and medical supplies are endangered throughout Ukraine.

Much of Ukraine’s domestic food production and delivery has come to a standstill in recent days, causing shortages in certain sections of the nation, particularly in those severely impacted by the Russian invasion. So far, owing to a local and international effort to send food across the country, this hasn’t turned into widespread starvation.

The deal between Russia and Ukraine to provide humanitarian corridors for evacuating residents from the besieged eastern towns of Mariupol and Volnovakha and resupplying them with food and medication failed on Saturday after Kyiv accused Moscow of breaking the cease-fire.

According to a spokeswoman for Fozzy Group, Ukraine’s biggest grocery chain, there was plenty of food—including fresh fruit such as cucumbers and tomatoes—sitting in warehouses around the nation earlier this week. However, a dearth of drivers and loaders, as well as intense fighting on the roadways and a scarcity of fuel, are impeding the flow of commodities from its warehouses to shops.

According to the spokesperson, over 90% of the company’s nearly 1,000 shops—operating under brands like as Silpo, Fora, and Fozzy—are open, including the majority of outlets in Kyiv.

Even in Kharkiv, Ukraine’s second-largest city and the scene of some of the most intense Russian bombardment during the invasion, Fozzy has been striving to keep businesses open as much as possible, shutting them for an hour or two when the situation becomes unsafe but reopening as soon as possible. According to the spokesperson, the firm informs customers about store hours and product availability on its websites and via social media on a regular basis.

The Fozzy’s restaurant franchise is no longer open. Bila Romashka, the company’s pharmacy chain, is now open. The firm has put out a request for volunteers to assist drive trucks and load items from its six logistics facilities on Facebook, Instagram, and other social media platforms.

A fire broke out at Ukraine’s Zaporizhzhia nuclear power facility on Friday as a result of Russian bombardment, raising fears of an environmental calamity. Ukrainian President Petro Poroshenko has requested a direct meeting with Russian President Vladimir Putin, who has said that the operation is proceeding as planned. Photo courtesy of Energoatom/Reuters

Spar International, a Dutch grocery retailer, claimed on Monday that 95 percent of its outlets in western Ukraine, far from the most severe fighting, remained open, albeit many were only open for a few hours. The firm, which has 65 stores in Ukraine, has established an internal fund to aid its Ukrainian operations in obtaining items from current suppliers locally. It’s also looking for new suppliers for crucial commodities to transport to its Ukrainian distribution facility, which is around 60 miles from the Polish border.

“With the continuous escalation of the conflict and the possibility of more disruption to local supply chains, it is critical to have the capacity to sustain supplies from our businesses in neighboring countries,” Spar stated.

Imports from other countries have been hampered. According to a spokeswoman, Dr. August Oetker KG, a German firm that normally supplies yeast, baking powder, and other baking goods to Ukraine from Germany, Poland, and Romania, suspended this last week and shuttered its warehouse in Kyiv. “At the moment, there are no vehicles that can transport our items,” he said.

Global NGOs are stepping up efforts to provide food to Ukrainians to help fill the hole. The World Food Programme says its first trucks of food rations to Ukraine arrived at the country’s border with Poland earlier this week. According to a WFP spokesperson, the food is arriving from Turkey, and the organization’s first emphasis will be on feeding those crowded along the border, especially women and children.

The World Food Programme (WFP) is providing emergency rations of canned and bagged food in places where people are on the move and unable to cook; the first cargo comprises 200 tons. It is providing cash and food coupons in areas where people still have access to shops and cooking facilities.

After landing at Warsaw Chopin Airport in Poland this week, WHO medical supplies for Ukraine was kept in a warehouse.

Meanwhile, the International Committee of the Red Cross is attempting to send medical supplies in. Trucks, on the other hand, “just can’t move due of the hostilities,” according to a spokeswoman. The Red Cross has 600 workers on the ground in Ukraine, but they are having difficulty getting around in places where there is heavy fighting. He noted that the organization’s primary emphasis would be on bringing in medications, tarpaulins, and blankets.

Medical supplies are already running short in certain areas. Hospitals are running short of medical oxygen, according to the World Health Organization, since trucks can’t deliver it from plants owing to road closures and a lack of drivers willing to make the voyage.

After a toddler was paralyzed by the virus in October, Ukraine launched a polio vaccination program for young children, the first in more than five years. The campaign started on February 1 but was called off when violence erupted.

The World Health Organization is air freighting goods for trauma treatment to Poland and maintains a supply depot in Ukraine. According to Kate White, an emergency manager for Doctors Without Borders, the international humanitarian agency is also working on establishing secure routes for medical supplies to travel across the country.

Jarno Habicht, WHO’s representative in Ukraine, stated, “We can provide kits to the nation.” “But the issue is whether they are reaching to where they are most needed in the health system.”

According to various organizations operating in the area, these issues are causing serious medicine shortages, such as insulin. “We’re hearing from our connections within Ukraine’s hospitals and health institutions that there is a serious scarcity of insulin right now,” said Ms. White of Doctors Without Borders. “This is a big worry for insulin-dependent diabetic patients.”

Due to a paucity of drivers, Novo Nordisk, a major insulin supplier, reported deliveries from its warehouse had been hampered. “We’re doing all we can to provide medications to people who need them,” a company representative said.

Healthcare experts and humanitarian workers have also cautioned that the confined settings in which migrants are forced to live would almost certainly result in an increase in Covid-19 infections. “Infectious illnesses mercilessly exploit the circumstances caused by conflict,” said Bruce Aylward, WHO director-senior general’s advisor. This is due to greater transmission, as well as a lack of healthcare, which results in a larger number of preventable fatalities.